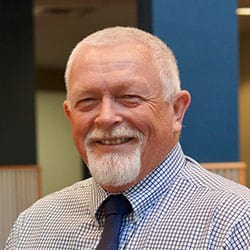 Tommy and his wife, Wanda, began attending Concord in January 2009.  Tommy retired from the Missouri State Highway Patrol/Water Patrol in 2014 after 33 years of service.  During his tenure with the Patrol, he was responsible for budget, facilities, personnel, legislation and other administrative duties as well as serving as a diver and other duties.  He attended the FBI National Academy in 2006, receiving post-graduate credit from the University of Virginia.  He also studied at College of the Ozarks majoring in Criminal Justice.

Prior to accepting his current position at Concord, he volunteered on the Building Maintenance and Construction team and served on the nominating committee.  In his down time, he enjoys singing, motorcycling, the outdoors, and traveling/RVing.