The dream began to take shape during a business meeting of First Baptist Church on February 8, 1970.

Concord Baptist Association purchased the recommended property – a seven-acre tract valued at $26,000 – and the endeavor became known as “The North Ten Mile Drive Mission Project.” On August 30, 1970, First Baptist Church approved building plans for the proposed mission and authorized expenditures of up to $56,000 for construction of the building. In addition to the donation of land from the association and the monetary commitment from the sponsoring church, a report of the First Baptist Church Missions Committee noted that additional financial contributions included more than $21,000 from Concord Baptist Association plus $1,000 from Centertown Baptist Church and $64.79 from Lebanon Baptist Church in McGirk.

It was the cooperative spirit of Baptists in this area that enabled Concord to have a successful beginning. It was a vision for what could be that led those saints to choose Concord’s location by faith.

North Ten Mile would become Truman Boulevard and the undeveloped farm across the road would become the Capital Mall.

Concord’s inaugural service was held March 21, 1971. The facts and figures of the day signaled great potential: 115 people in Sunday School; 225 in morning worship; 777 outreach visits reported; nine new members added by letter – and all this took place with a new pastor and a brand new 40 by 80 foot auditorium in which to worship.

From 1971 – 1989, Concord was blessed with three pastors. This resulted in 18 years of growth, property expansion, building development and an overall good spirit in the church.

Don Baker served the congregation during the early years (1971 – 1976). Dr. Baker provided solid leadership during those early days. It was a time of rapid growth in the young congregation. By the time he left to take a position at Southwest Baptist University, Concord had a resident membership of 403 with an average Sunday School attendance of 223. Eighty-two people were baptized during his ministry at Concord.

In 1974, under his leadership, Concord built a 100 by 100 foot Family Life Center. That building has been recently remodeled and still provides education, recreation, and multi–use space. An additional nine acres of property was purchased in 1975.

Jim Vest served Concord as pastor from 1977 – 1982. Those were not years of great growth but neither were they years of decline. Like a growing tree, the church was solidifying during a period of little outward growth. The stage was being set for another period of expansion.

Jeff Barnes accepted the call to become Concord’s third pastor in July 1983. Nearly 100 people were added to the congregation during the first year. It was an indication of growth to come.

It was during this period that Concord launched another building program. In 1985, a 400 seat auditorium with adjoining classrooms and offices was completed. Today that building is known as “The Blue Room” and is a multi–purpose room serving primarily the student ministries.

Concord added staff and ministries during Barnes’ tenure. When he left in 1989, the church had increased its resident membership to 697. His ministry is remembered as one of growth and progress.

From August 1989 until August 1991, Concord was without a pastor. It was a difficult period in the life of the congregation but it was also an opportunity to refocus and make adjustments. Controversy had raged throughout the Southern Baptist Convention during the 1980’s over issues of biblical authority commonly known as the “Battle Over Inerrancy.” This issue hit Concord full force in 1991 as it extended a call to Monte Shinkle to be Concord’s fourth pastor. The conservative Shinkle was called by the narrowest of margins. His call resulted in some good people leaving the congregation. It was a difficult period of time in the congregation. The church had made its choice and God had great things on the horizon.

Concord was entering another period of solid growth. The next few years the church would outgrow its facilities and parking. Growth would be accommodated by offering multiple worship and Bible study hours. The front lawn would be developed into parking. The “Take Heart” television ministry was added in 1994 and continues as a strong outreach across central Missouri. By 1996, it became obvious that the two worship services and three Sunday School hours were not enough. The church needed to build.

Building is never easy and building the worship center Concord uses today was no exception. The church had to make more than one attempt to raise enough money to get the 3.2 million dollar project off the ground. A lengthy debate took place over whether to have a basement. It would have saved much money to build a slab foundation. A balcony was also discussed. In the end, the church voted to build the worship center with the basement to be finished later and structurally sufficient to eventually add a balcony.

Construction began in the fall of 1997 and Concord occupied its new worship space in December of 1998. It was a great time in the life of the church. For a brief period, the church conducted one worship hour and two Sunday School hours. By 2000, growth had once again called for two worship hours and three Sunday Schools. 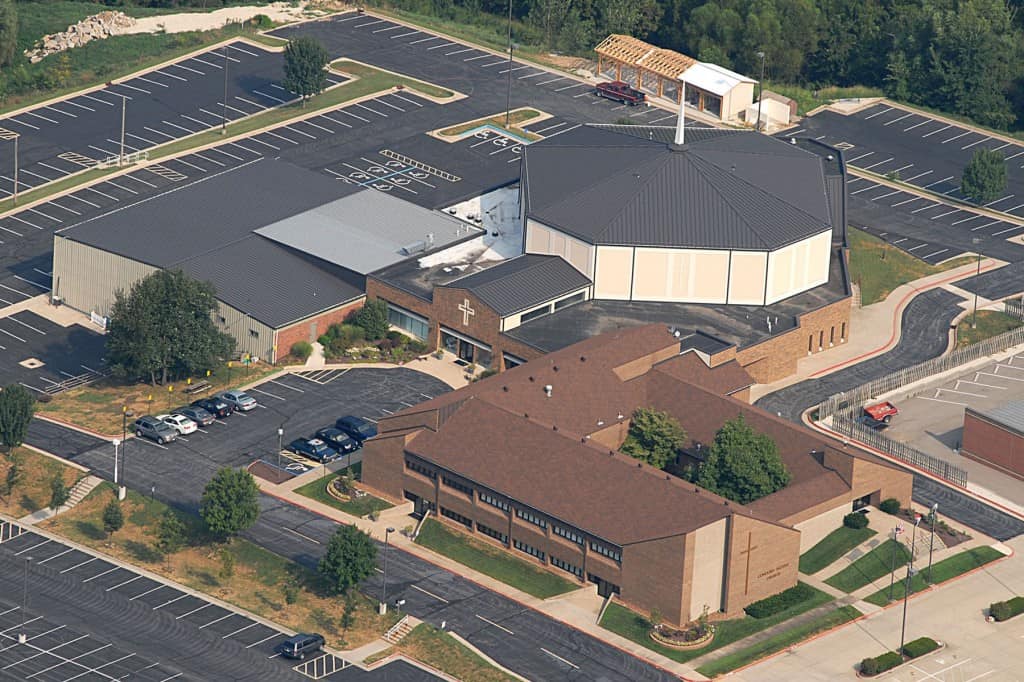 In 2001, Concord acquired the property immediately south of the church and previously owned by Capital Savings and Loan. This allowed the congregation to develop the three acres for much needed parking.

To meet the demands of continued growth, Concord once again entered a building program by finishing the basement space. The project was completed in the fall of 2006 and has provided much needed adult and multipurpose space.

Throughout the years, this congregation has experienced the continual outpouring of God’s grace. There have been difficult days and happy times. The church today is experiencing greater attendance than ever before.

Additional space was added in 2010 with the purchase of property to the North East of the facilities on Truman Blvd. This retail space is being slowly transformed into classrooms and office space.

Since 2002 Concord has experienced a transformation in mission involvement. Well over 30 trips have taken place outside of the United States. This congregation has traveled to Brazil, Myanmar, Cambodia, India, Nepal, El Salvador, Romania, Greece, Spain, Taiwan, and Senegal. Numerous trips have been made to Mexico. An ongoing ministry of evangelizing through eyeglass distribution continues to involve scores of Concord Members.

Concord has also traveled to various regions across the US assisting believers and strengthening churches. Church planters such as Joey and Becky Baysinger are reaching to areas in need of the gospel. Through our “Direct Support” mission efforts we continue to reach out.

The vision of Concord Baptist Church has remained consistent throughout the years. There has been a great commitment to love God and one another. The Bible is faithfully proclaimed from the pulpit and in the classroom. Concord has been blessed.