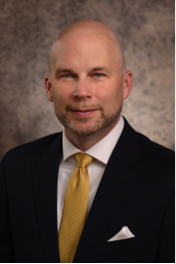 Dr. Neil Franks was elected President and Treasurer of the Missouri Baptist Foundation in October 2017. He joined the Foundation after spending ten years leading the First Baptist Church in Branson, Missouri as Lead Pastor. The Foundation currently manages just under 200 million dollars in assets servicing over 900 accounts. Their purpose is to advance the Gospel by providing money management services to ministries and helping people see the possibilities of financial planning and giving.

Neil grew up in Malvern, Arkansas, the second of two sons born to public educators. He graduated from Henderson State University in Arkadelphia, AR, with a Bachelor of Arts degree in Speech Communications. In addition, he earned a Master of Divinity from Southwestern Baptist Theological Seminary in Fort Worth, Texas, and a Doctor of Ministry degree from Midwestern Baptist Theological Seminary in Kansas City, MO.

Neil met his wife Kendra while in college. It was love at first sight for him on the first day of his freshman year, but it did take a little while to convince her. She is an accomplished musician and serves as Assistant Professor of Choral Music at Hannibal-LaGrange University after earning her PhD. in Music Education from the University of Missouri. They have been married since 1994 and have two sons, Kirk, a recent a graduate from College of the Ozarks, and Travis, a freshman at the University of Missouri in Columbia, MO.