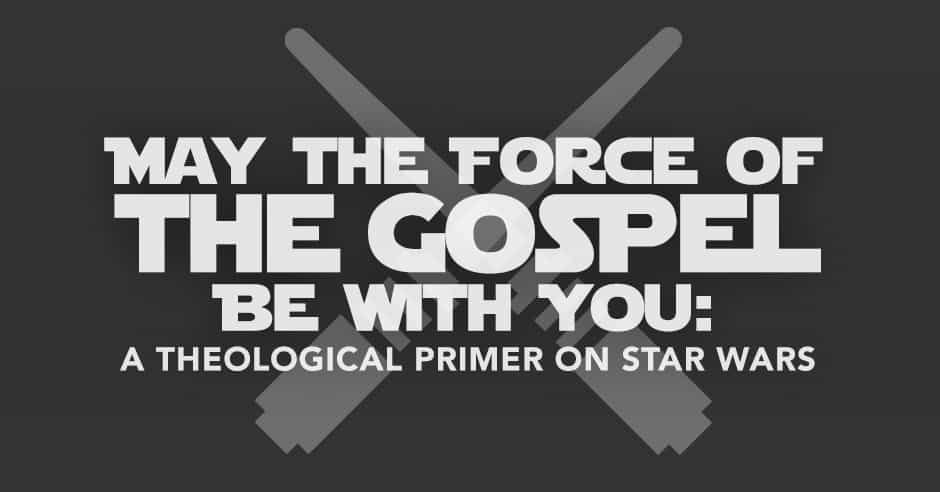 As we ramp up for the celebration of Christmas this December, you might have noticed our culture ramping up for something else. That something is one of the most anticipated movies of all time, excitement so palpable you must have been self-exiled on a remote planet like Dagobah to have not noticed. Most people have felt the growing crescendo of pent-up anticipation of the latest installment of the Star Wars movie saga, as Episode VII, The Force Awakens – the first full Star Wars movie in over ten years – hits theatres December 18th.

While we ceased to be shocked at lines queuing up weeks before the movie’s release, what was most shocking was a recent headline in the London Telegraph that a new church for Jedi-ism, the fictitious ancient religion of the guardians of peace in the Star Wars universe, has seen an uptick in membership (upwards of thousands per day) pursuant to the new movie. Wow. Talk about your Jedi mind tricks!

In light of this frenzy, the question we as Christ-follower face is how do we respond to this the phenomenon as seemingly ubiquitous as the “Force” depicted within it? Should we eschew the movie altogether? Should we adorn ourselves in cosmic garb, urge our wives to put their hair into honey buns, submit to the will of the Force, and follow the Bantha tracks into the theatre? Or is there a middle ground, one where we can enjoy a great story of good vs. evil without loosening our theological convictions? I would subscribe to the latter, and to facilitate such a position, will illustrate four primary theological fissures of Star Wars lore that heterodoxically distances it from Christianity. We, and especially our kids, should be mindful of these distinctions as we enjoy the film.

First Point of Incongruence: The Stars Wars universe exists as a form of pantheism.

From the onset of the first Star Wars movie (Episode IV), the sagacious Obi-Wan Kenobi (played by the late Sir Alec Guinness) describes the ultimate transcendent power of the universe, called the Force, as “an energy field created by all living things. It surrounds us, penetrates us, and binds the galaxy together.” This fictitious theological system in Star Wars is really more of a synthesis of a pre-Socratic philosophy known as Monism, meaning all of what exists is of one substance, and of far eastern pantheistic religions that describes God as all-encompassing. Forms of this can even be found in the work of Paul Tillich of the mid-20th century. While many nuances exist, it most closely aligns with a strand called immanenistic pantheism, which is essentially religious monism.

There are a number of problems a Christian would have in accepting the logic and truth of Star Wars immanentistic pantheism. First, this system portrays a god that is subsistent on the created order for its “fuel” and supremacy. A mutable god that changes, that depends on other contingent beings, cannot be God. Second, this system robs God of any transcendence. A god stripped of transcendence then lacks the omnipotence to bring the universe into existence. Inexplicably, Star Wars immanenistic pantheism would adhere to a universe that is eternal. However, if the Force grows, as stated by Yoda, then it must be expanding, and if it is expanding, it must have had a beginning, albeit a beginning devoid of anyone to cause it! Finally, a god of this Star Wars system is a divinity at conflict within himself. If the divine force surrounds everything, then it surrounds the affable Ewoks who appear in Episode VI, who practice a primeval form of polytheism. If this divine force is binding the Ewoks to itself, then you have a divinity, drawing power from a people and system that militates its very philosophical tenants. Only the all-knowing, all powerful, transcendent and immanent, God of the Bible, Elohim, accounts for the logical and theological short-comings of the divine presence found in the Star Wars Force.

Second Point of Incongruence: The Star Wars universe is governed by ethical dualism.

The Star Wars universe operates in constant tension between good and evil powers that are perpetually vying for primacy. The main characters seek to shift the operable balance of good and evil, holding to the ideal of bringing “balance in the Force.” Again we see an admixture of far eastern religion influencing Star Wars syncretic theology, in this case Zoroastrianism. Zoroastrianism holds to a monotheistic god, but one who himself suffers from a sort of personality disorder, possessing a dual-nature. One nature of the Zoroastrian god, Ahura Mazda, is good while the other is evil, both jockeying for power. The Star Wars “Force” also is used for virtue, but also consists of a “dark side of the Force.”

The Star Wars universe also operates under a similar vacillating dualism, one where the good and the evil that occurs is always recalibrating, both at a macro/universal level and on a micro/individual level. This doesn’t play out in the real universe. On a macro level, we are not born into a world that is 50% good and 50% evil. The Bible teaches, and our anthropology tells us, that we are all born into this world 100% evil. On an individual level, our suffering is not meted out on a 1:1 calculus with our sin.

And while evil exists, it is not co-regent with God, nor does the sovereign God that created all things have an inkling of dualistic evil in Him. Such is the case, with the divine “Force” of Star Wars, which then cannot be good or virtuous, because the evil (and good) that occurs is not only an outworking of the Force, but given the Force is in all, all evil is conjoined with the Force. A deity such as this, without ultimate control of His good pleasure is not a god that can be trusted to bring one of his good promises to pass.

Third Point of Incongruence: Salvation in the Star Wars universe as “One with the Force.”

Yoda, the Jedi guru, tries to quell the fear of death with the following line, “Rejoice over those who transform into the Force.” Later, in television episodes from the spin-off series, The Clone Wars, Yoda succinctly describes a Jedi who has died as becoming “one with the Force.” These, and other examples demonstrate that salvation in the Star Wars universe is realized by losing one’s physical existence and melding into the homogenous divine substance that is the Force. One could say this is not unlike that salvific release via the state of nirvana in the Hindu religion.

We must be careful here, because the Bible uses similar language when describing our salvation, as being “in Christ.” This phrase is used 238 times in the New Testament, and speaks to the necessity of our spiritual union with Jesus Christ, and as result, to procure the benefits of Christ. However, the grave difference for Christians is that upon our death and appropriation of spiritual union with Christ by faith, we do not ever relinquish our humanity. Unlike Star Wars, upon our glorification, we cannot become one with the divine because then we would be divine. We could never “become God” because even if this could occur, our entire existence is contingent, limited, and derived from God, and thus, by definition, we could not be divine. Given that logic, becoming god through the Star Wars Force is but a farce.

Perhaps one of the most prevailing themes of Star Wars that imitates post-modern culture is its positing of moral relativism and rejection of absolute truths. We could go on and on about the subjective ethos of Star Wars. One common example is multiple Jedi figures using the line, “from a certain point of view,” which equates into the denial of any absolute truth, i.e., what is true for you may not be true for me. This subjectivism is a principal tenant in the far eastern religion of Jainism, which commands its adherents to seek personal truth for themselves. The Jedi are also told to let go of all attachments (which itself, is a very Buddhist philosophy) but does this mean to let go of the belief that attachments must be let go?

Ironically, any truth claim or dogmatic assertion is itself a claim to objective reality. Thankfully, there are absolute, timeless truths given by an eternal truth giver. Without absolute truth, there can be no moral standard, and without any moral standard, there can be no evil—everything, chaotically, just “is.” It is as C.S Lewis wrote, in The Abolition of Man, “On this view, the world of facts, without one trace of value, and the world of feelings, without one trace of truth or falsehood, justice or injustice, confront one another, and no rapprochement is possible.” Moral laws, just like the laws of physics, exist for our benefit and are not subject to change, as the law-giver, who transcends time, does not change. Yet, the giver of this moral law has so loved us as to implant us with a moral compass written on our hearts (Rom. 2:15). It is God’s very character, and it is His righteousness that we must, unlike the Jedi, find attachment.

Bottom-line: we as Christ-followers need not fear attending the latest Star Wars movie.

The timeless battle of good vs. evil makes for a great story to be shared across generations. I played with Star Wars toys as a kid, as my kids will do this Christmas. And we plan to watch the movie together (after I screen it first). I love Star Wars; this article is not an attack on Star Wars. But as a parent, entrusted with the responsibility for the edification of my children, I must point out the lines of theological lines of demarcation.

Some may laugh at such hyperbole, noting that if we are getting our theology from movies or TV, we have much bigger problems. No argument here. But we also know that life, especially 21st century life, has a way of imitating art, which subtly inculcate our behaviors and plant latent seeds of theological tension. Ultimately, as we have seen, Star Wars is a great drama, but its theology is not from a galaxy far, far away, but more likely from an earthen region in the far, far east. Just remember that it is only the gospel of Jesus Christ that can save humanity by “[redeeming] us from all lawlessness and to purify for Himself a people for His own possession who are zealous for good works” (Titus2:14). Enjoy the show!